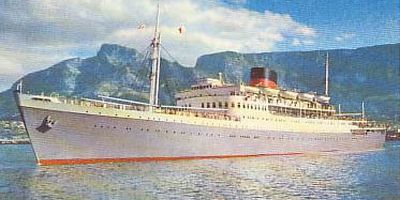 Union-Castle Shipping line: how it all began

Union-Castle Shipping line: how it all began

There are many people in Cape Town who have fond memories of the Union-Castle shipping line, either because they were lucky enough to travel on one of their ships, or because they brought their mail, comics and magazines from England.

It certainly has an interesting history.

In 1853 the Union Line was established (then called the Southampton Steam Shipping Company), transporting coal from South Wales to Southampton for the large liners. According to auction pickup service, in 1854, all their five ships were taken over as transports for the Crimean War, returned to their owners two years later, but stood idle due to coal stockpiles in Southampton.

A year later, 1857, the Union Line was contracted to transport mail to South Africa, leaving Southampton every Thursday, the first being on the Dane, September 15.

Donald Currie owned the Castle Packet Co. and with his four ships operated the Liverpool to Calcutta route (sailing around the Cape of Good Hope), until business declined with the opening of the Suez Canal 1869. From 1869, the Castle Packet Company also started transporting mail to South Africa.

In 1872, the Cape Colony was granted the status "Responsible Government" with the first Prime Minister being John Molteno. Molteno was keen to avoid a monopoly and granted joint contracts to both companies of the condition that the two companies would not merge. According to the 1888 contract, amalgamation was forbidden, so identical services were offered by both companies leaving alternatively every Thursday (Union from Southampton, Castle from London), tickets were interchangeable.

Discovery of gold in South Africa, increased the number of travellers to South Africa, which created the two shipping lines to try and compete with other on the quality of the services on board the ship and the speed of travelling between England and South Africa.

In 1890, the Castle Mail Packers Company introduced the 5625 ton Dumottar Castle ship (a superior ship, offering different classes and which Winston Churchill travelled on when he was a reporter during the Anglo-Boer War).

The Union responded with a bigger ship (Scot) and reduced the sailing time to 15 days.

This fierce rivalry created more luxurious, faster ships, and led both companies to look at opportunities to create a luxury hotel in Cape Town for the wealthy British travellers. Union opened the first luxury hotel, The Grand Hotel, in 1894, the Castle responded by opening the Mount Nelson Hotel in 1899. This fierce competition created a financial strain for the Union Line, and in 1900, with the new mail contracts, having had the forbidden amalgamation clause removed, Donald Currie approached the Union Line to merge the two companies and the became the Union-Castle Line in May 1900.