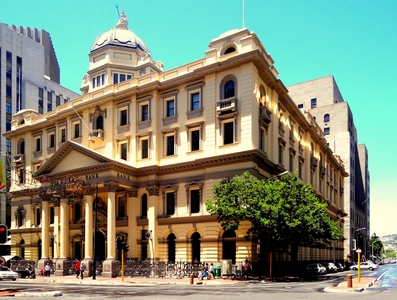 Events and buildings are often discussed on our private walking tours, but I think it is really important to focus equal attention people.

The discovery of diamonds, a significant event which shaped the early part of the 20th century, lead to a significant wealth available to the Public Works Department having the funds to employ experienced architects from England.

Charles Freeman (1833 - 1911), arrived in South Africa in 1863 at the age of 30 years, recruited by the Natal government architectural branch. Nine years later he moved to Cape Town where he was awarded the tender (over six other local competitors), to build the Houses of Parliament. Shortly afterwards, it was established that Freeman's plans were flawed as he had not taken into consideration the presence of ground water leading to controversy over the overall design and costing for the Houses of Parliament. Freeman was fired and replaced by Harry Greaves)

It was however not all bad news for Freeman who went on to establish his own private practice in Upper Strand street, Cape Town and was very successful. Some of his famous buildings in Cape Town include: Methodist Church, Greenmarket Square (1878), Standard Bank Building, Adderley st (1880), and the Grand Hotel (1894), the first five star hotel in Cape Town, commissioned by the Union steamship company (demolished).

Controversy caught up with Freeman again, as he was the agent for Macfarlane's Castings and plate glass, and a conflict of interest was identified with him using these materials in his buildings. The expansion of plate glass used in the shop front windows along Adderley st, is largely attributed to Charles Freeman.